Before you pan this plug-in, ask yourself, “Are my mixes leaning in the headphones even though they sound good in the monitors?” If the answer is “yes,” more than likely, traditional panning controls are the culprit. Variable pan controls were invented to overcome the limitations of L-C-R (left, center, right) panning, and Boz Digital’s Pan Knob was created to overcome the limitations of traditional panners. Since low frequencies pull a mix in their direction, Pan Knob uses a superior algorithm that keeps low frequencies in the center image while panning higher frequencies anywhere you choose in the stereo field. (Low frequencies behave omnidirectionally anyway, so why let them mess up your mix for no musical advantage?) The result is a balanced, harmonically and rhythmically interesting mix that doesn’t favor the bass-heavy instruments.

At its core, panning is an illusion created by a volume balance between two speakers (otherwise known as the phantom image), which changes depending on where your listening position is in relation to them. In headphones, where 87% of all music is currently consumed, the balance negatively changes depending on which instrument has greater low-frequency information.

A recent trend by professional mixers to overcome the psychoacoustic limitations of standard pan controls is to avoid panning altogether. Many have adopted L-C-R (left-center-right) mixing, which was all we had in the ’60s. However, Boz Digital Labs doesn’t believe in fixating on the past as a solution to modern problems. Pan Knob addresses and solves the problems inherent in traditional panners (both hardware and software)by applying some in- and out-of-the-box thinking, plus some clever coding.

If you’ve worked on an analog desk, panning is more or less hit-or-miss. It creates an unstable image, further exacerbated as listener position changes. One complicated solution was precision panning, which used the console’s oscillator to send a signal to two channels and match level meters. That way you could ensure that a harmony placed mid-right channel was psychoacoustically opposite a voice panned mid-left—provided you were using headphones or didn’t stray from the sweet spot between the speakers.

However, precision panning alone is not sufficient to solve all creative issues. For example, when panning background vocals, alto and bass parts sometimes sound better in context of the ensemble when panned wide, and other times when close to the center. The same is true for soprano and alto voices. Figuring out which sounds better is a time suck. One trick that emerged to maintain a balanced vocal blend with traditional panning, was to filter out much of the bottom end to prevent the low frequencies from dominating (as they naturally do) and pulling the ensemble to one side. Of course, that meant thinning out the vocals, which may or may not be desirable in the sonic texture overall mix. Wouldn’t it be nice to eliminate that compromise? (Funny, that’s what Boz thought too.)

Pan Knob to the rescue

Pan Knob enables you to instantly swap pan positions of instruments, choose between Balance or Pan for stereo tracks, select pan laws, and even pan beyond 100% hard-left or right to mix outside the speakers. Best of all, Pan Knob lets you depart from standard panning schemes while still sounding natural, and doesn’t cause the balance problems common to ear-bud and headphone listening. Pan Knob enables you to experiment with panning without all the tail-chasing and tradeoffs that come with moving instruments and vocals around the stereo field using traditional panners. As an added benefit, Pan Knob speeds up your workflow, which is essential for both professional and aspiring mix engineers.

If you’ve been experiencing a pandemic in your headphone mixes, Pan Knob is the cure. Download Pan Knob now.

Only logged in customers who have purchased this product may leave a review. 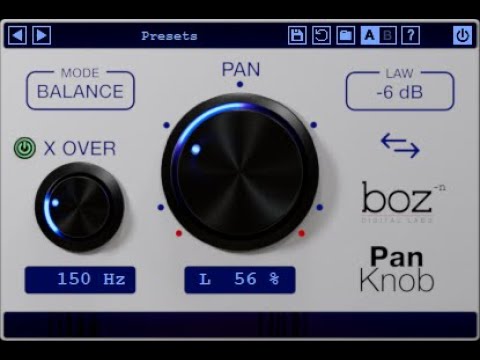