Boz Digital plug-ins mainly owe their existence to the endeavor of overcoming limitations of 3rd-party plug-ins that hit a wall (so to speak) when faced with complex audio tasks that require a subtle, multi-tiered approach, rather than single-handed brute force. While BDL plug-ins are one-a-kind, offering a unique approach to audio processing tasks, The Wall is a limiter, plain and simple—and therein lies its greatest strength. Its origin story is at once familiar and yet remarkably singular. Rather than waste another minute having countless hours of work undermined by the shortcomings of overly complex limiting plug-ins, Boz found it more expedient to design a limiter plug-in from the ground up. The goal was to create a user-friendly device that would achieve the results we all seek, but quickly and easily. It’s kind of ironic that The Wall, which we’re confident will become your go-to limiter, arose from the limitations of other limiters. Or maybe it’s Alanis Morissette ironic . . . we’re not sure, since it’s more about complications and finding a means to overcome them without compromise in functionality or sonic integrity. To put it simply, The Wall is a brick-wall limiter designed to give you a fast and intuitive way to make mixes competitively loud without destroying their musicality and dynamics—and like all Boz Digital Labs plug-ins, that’s not all it does.

These days it’s customary to see the waveform of a final mix look like a solid bar. Perhaps you prefer to deliver more dynamic mixes, but when you send a first mix for client approval, they expect to hear it sound like the final mastered version—which generally means loud. It follows that even a reference mix for the artist must compete with the loudness of commercially released tracks. Rather than have you second-guess yourself with a complicated limiter in order to maintain the balance of your mix, The Wall’s elegantly simple controls not only provide the ability to tweak, judge, and compare efficiently and effectively, they provide the results you need in a breeze and make you look like a better engineer in the process. From a straight mastering standpoint, The Wall can make your mixes sound as loud as the competition without compromising all the hard work you’ve done to get your final version to the mastering stage.

Not just another brick wall in The Wall

Brick-wall limiting sounds like it should be an uncomplicated process. However, like most activities in audio, the steps and processes to achieve what should be direct and rational tend to be convoluted and counterintuitive. When all you want to hear is your mix gets louder with dynamic relationships remaining intact, it’s never quite that simple. There are attack and release times to consider (which never seem to make any difference until you mess things up), as well as ratios, ceiling, look-ahead, window shapes, multi-band crossovers, expanders, gates, variable knee, and so on. Seriously, can you hear the difference between a variable knee set to 50 or 75, and what values do those numbers even signify?

Dialing in the “proper” settings to match your music represents another conundrum. Program material is complex and changing (unless you limit it into a solid bar). Settings, on the other hand, are static. It follows that a chorus will hit the limiter harder than the verses, causing it to clamp down on your mix when you want it to open up wide. You could chop up your song and treat each section differently, which is counterintuitive to the way music exists in real-time and opens up other potential issues, plus extra layers of conversion—and do you really want to work that hard when The Wall gives you a “one track, one limiter” solution?

How we did it, by Boz Von Frahnkenshtein

From a designer’s standpoint, a quality limiting algorithm is complex, as are the controls to achieve transparency. (There’s nothing worse than hearing your mix turn harsh and noisy as level increases.) Since elegantly simple solutions are what Boz lives by, the hard work is integrated into The Wall so that all you have to do is tweak three variable controls and switch between two limiting modes; smooth for legato program material, or aggressive for percussive material.

On the left side of The Wall’s waveform display, there is a threshold control that also applies gain to maximize the output level. To the right is a “ceiling” slider ranging from 0dB to -18dB that does as its name implies. The Wall also has a unique “Flavor” control that comprises over 30 parameters into a single control. All you have to do is slide and decide. Flavor enables you to adjust the limiter to match your audio source. The limiter’s behavior is then further refined with the Mode selector. This is where the “one track, one limiter” solution lives.

Standard on all Boz Digital plug-ins is an A/B bank for quick comparisons since we lose perspective quite quickly. However, when it comes to making decisions about loudness, it’s far more difficult, since our physiology hardwires us to automatically accept that louder sounds better (hence the loudness wars). To know if your tweaking and tweezing are for the better, right below the bypass button is a big round friendly button! A beeyootiful shiny button! A jolly candy-like button! A cherry red button when activated, Sanity Check level-matches the output to the input so you can quickly A/B your results with the incoming audio to make sure you aren’t deceived by the loudness increase.

Some other bricks in The Wall

Along with its primary limiting functions, which tend to fall more on the creative side of the tracks, The Wall includes some utilitarian features for more practical control over your music.

The Oversample and its minions

When rebellious inter-sample clipping threatens to overrun your mix, The Oversample will crush these ungrateful rebels under its merciless boot heels (Bwahahaha, etc.). Intersample clipping occurs when the analog signal has higher peak values than any of the samples themselves. Oversampling compresses the signal based on a closer approximation of the analog signal, as opposed to the digital word. The Oversample has four minions (buttons): Off, 2x, 4x, and 8x. The higher the oversampling, the better the plug-in will prevent inter-sample clipping.

The MFiT button instantly sets The Wall to be optimized for mastering your tracks to a lossy format (MP3, AAC, etc.). Because these formats can change peak level, MFiT sets the output ceiling to -1dB and sets oversample to 8x, ensuring your lossy encoded track will not clip.

With the stereo link button in its default position (off), The Wall operates in dual-mono mode. Dual mono prevents one side of a mix, where more energy resides, from causing the limiter to clamp down on the side where less compression is necessary. With Stereo Link enabled, The Wall will apply the same amount of compression to your left and right channels to keep your stereo field consistent.

Dithering is one of the more arcane functions of down-sampling to formats with lower bit depth. Without going into a treatise on dithering, which is always confusing at best (e.g.: How does adding noise improve dynamic range?), it’s easier to think of it as a game of digital Tetris.

Down-sampling truncates or punches holes the digital word describing the waveform, causing random quantization errors, which produce distortion. Dithering fills in the blanks with a consistent noise floor, which itself isn’t heard, and subsequently, neither is the distortion. There are various types of dithering that some limiters generously supply, such as POWr1, POWr2, UV22HR, etc. Which do you use? Can you hear the difference? Most of us can’t. Wouldn’t it be better if you could just select the appropriate bit-depth for the format you’re mixing down to and be done with it? Yes. That’s why The Wall offers buttons for the bit depth you’re down-sampling to and takes care of the rest for you.

This may seem obvious, but we promise you, there are more reasons to use limiting than loudness and preventing overs. If you want to increase loudness and mastering your mixes risk-free, The Wall should be the last insert on your mix processing chain. (A/B and Sanity Check will tell you when you’ve nailed it.)

The Wall is purposely designed to tap your CPU as lightly as possible, which enables you to use as many instances as you like. This was done with mixers in mind who use limiters for more than just mix bus processing. For example, with parallel drum compression, the secret of parallel punch is consistency in the compressed aux bus, so when you sneak it into your mix, it fills the stereo field without fluctuation. Using limiters, or compressors set to limit (pre-fader) on parallel drum aux channels is one of the secrets of heavy rock producers.

Another secret of heavy rock and metal producers/mixers is to use a limiter on individual tracks. For example, some mixers put a limiter on every component sound of kick, bass, and snare, (e.g.: inside kick, outside kick, sub kick, samples, etc.) The reason for this is to maintain their imagery and ability to poke through in a dense sonic landscape.

If you’ve struggled in vain keep your kick and snare from being swallowed by layers of guitars, keyboards, bass, and background vocals during the choruses in a heavy rock or metal mix, you could automate, but that tends to take time and is guaranteed to produce overs and subsequent tail-chasing. A limiter on each track is a far more elegant solution. It follows that you need a limiter that’s easy to operate, gets great results quickly, and doesn’t pin your CPU resource meter. In other words, you need The Wall.

Download The Wall and visit sonic mayhem on an unsuspecting populace (Bwahahaha) without the demon hordes feeding on the soul of your mix.

7 reviews for The Wall 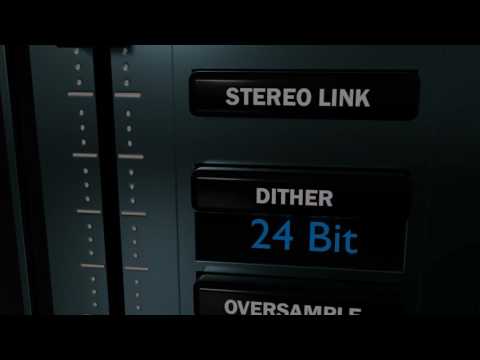